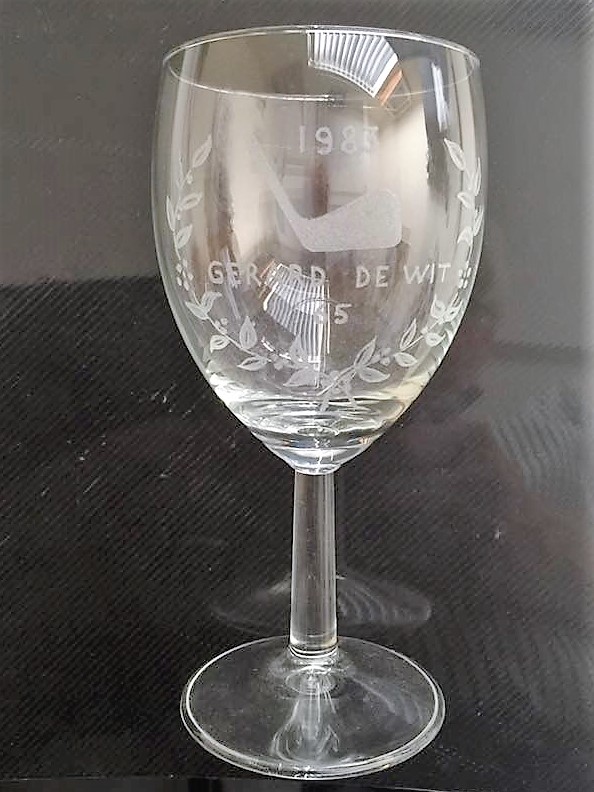 Glass made on the occasion of the 65th birthday of Gerard de Wit (28/7/1918 – 22/6/1983), Dutch golf professional at successively the Haagsche, the Hilversumsche and the Noordwijkse. Donated by golf journalist Aleid Kemper.

Gerard de Wit, born in Wassenaar, was perhaps the best Dutch golfer the Netherlands has ever known.
In 1936 he became an assistant professional at the Koninklijke Haagsche Golf & Country Club. He never won the Dutch Open in the Netherlands, but regularly finished in the Top-10.
Five times he was runner-up:

In total he won 33 Dutch titles, including fifteen times the Harlequin Cup, which was later called the Twente Cup. He also won the National Open (o.m. 1954) for years on end.

In the 1960s, he was invited to the Masters at Augusta three times.
He also represented the Netherlands at the World Cup.
Gerard de Wit participated in Shell’s Wonderful World of Golf in 1963. He played at the Haagsche Golf & Country Club against Byron Nelson.

In the United States, where they called him Gerry Dewit, he achieved many successes in their masters. Also in England, on the West Course of Wentworth.

Gerard de Wit later taught at the Hilversumsche Golf Club (1962-1966), where Alex Loesberg did an internship with him in 1957, and then at the Noordwijkse Golfclub.

Gerard de Wit Trophy
At the Noordwijkse Golfclub the Gerard de Wit Trophy was lost for the first time in 1975. De Wit had received the cup from a stranger in 1974, shortly after his 12-year-old daughter had died. The match is played in ecclectic and always takes place on Whit Monday. The proceeds go to the Queen Wilhelmina Fund. The winner was, among others, Three times Hans Catz.

Gerard de Wit Medal
A special medal was set in 2007 for the best Dutch player to make the cut at the Dutch Open. With retroactive effect, it was awarded to Maarten Lafeber (2005) and Robert-Jan Derksen (2006). Peter van Bruggen designed the medal.