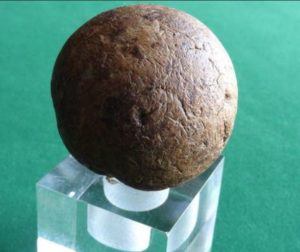 As far as is known, the very first balls, which were used in the colfspel, were made of wood. At least in the Netherlands. And as long as the contrary has not been proven, we also follow this general assumption.

Whether that was also the case in Scotland outside the Netherlands, no convincing evidence has been found for this.
The wooden balls were often made of the very hard boxwood or beech wood. Trees carved from the good wood, which were common in the Netherlands. They were slippery and flew no further than about 75 meters.