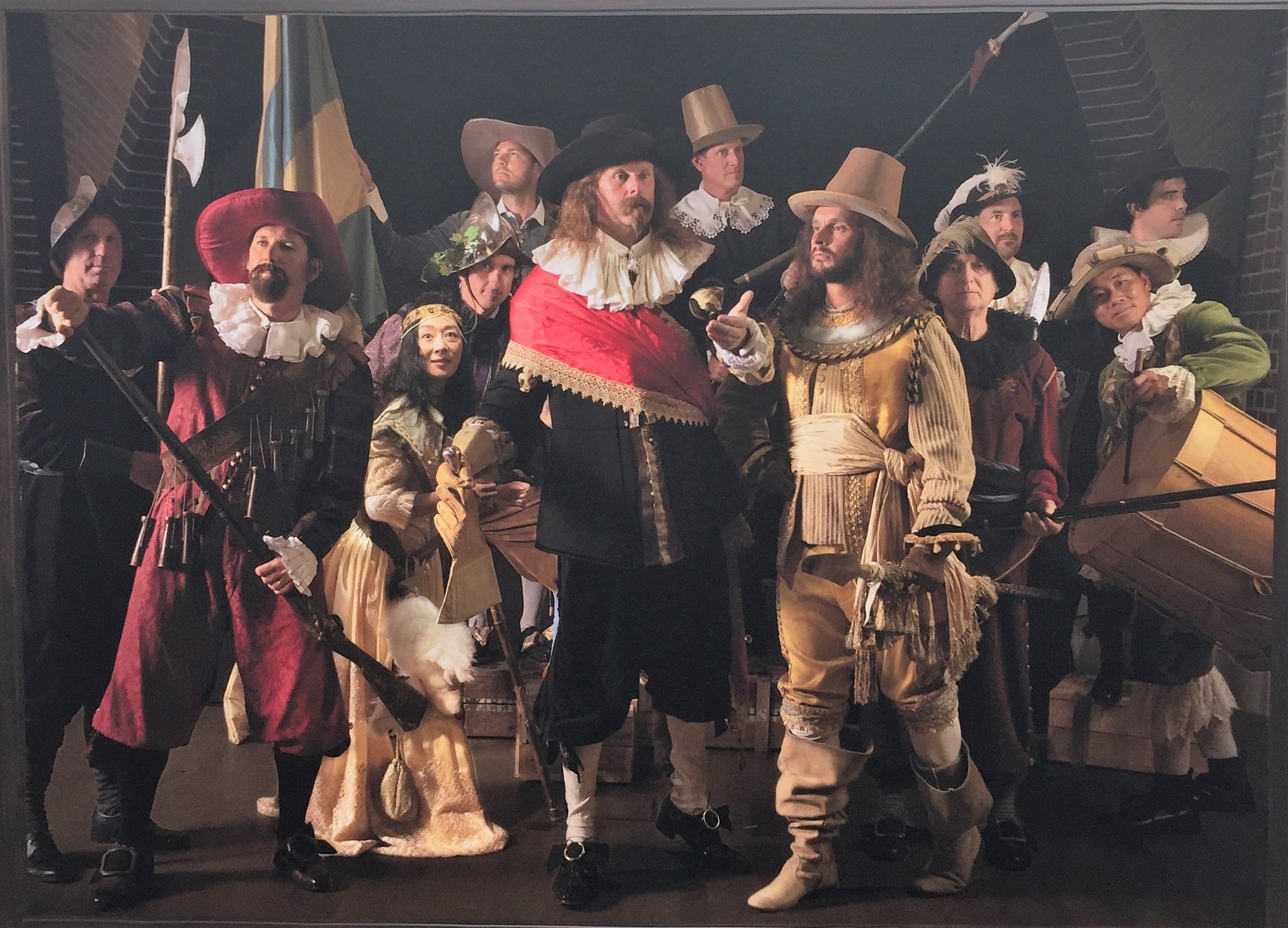 Visitors to Golf Course Bleijenbeek in Afferden are now welcomed by a life-size photo in the atmosphere of Rembrandt’s Night Watch. It is a gift from the organization of the KLM Open to the golf museum that is located on Bleijenbeek. The photo was taken in honor of the hundredth edition of the tournament.

John Ott, curator of the Nederlands Golfmuseum, is very pleased with the new acquisition for the museum. “When I saw the photo at the KLM Open fair, I was quite impressed and I immediately promised that it could get a place in the museum after the tournament.”

Still, it took several months before he got his hands on the photo. “After the tournament, it started wandering around and the exhibition manager of TIG Sports, the organizer of the KLM Open, had to look for it,” says Ott. But in May, the photo of 3 by 3 meters was handed over to the museum. Because of its size, the image has been given a place in the hall of Paviljoen Bleijenbeek, right next to the entrance of the museum. “We could not wish for a more beautiful tribute to Dutch golf,” says Ott.

At work, eleven former winners of KLM Open, a tournament that is part of the European Tour, will be displayed. Among them are two Dutch champions: Maarten Lafeber, who won the tournament in 2003, and Joost Luiten, who received the cup in 2013 and 2016.

The Englishman Peter Townsend (72 years old), who won the tournament in 1967, is the oldest person portrayed. On the far left is the youngest Dutch Open winner ever, the then nineteen-year-old Englishman Paul Way, who won the KLM Open in 1982. Tobias Dier, who achieved the lowest score (60) in 2002, occupies a modest place in the photo and is flanked by Ashun Wu, the first Asian to win the KLM Open. The only woman in the painting is his wife Rebekha Wu.

What is special is that the photo was taken in the Rijksmuseum in Amsterdam, where the original Night Watch hangs. “We wanted to do something special for the hundredth edition,” explains Daan Slooter, the tournament director of the KLM Open. “Since KLM and ING, who sponsor the tournament just like the NGF, also support this museum, it was possible to organize a dinner with the former winners of the KLM Open in the room where the Night Watch hangs.”

One thing led to another and so the idea was born to recreate Rembrandt van Rijn’s Night Watch with the former winners of the KLM Open on it.

The photo was taken prior to dinner and there was a lot involved. Daan Slooter: “In terms of planning, we have been working on it for months and a large team was involved in the implementation. Make-up artists, stylists, photographers, but also a film crew to film the ‘making of’.

That film has gone viral and been watched all over the world. In the current media landscape, social media is very important and for us it was mainly a nice marketing tool to generate attention for the tournament. The fact that the photo has now been given a place in the Nederlands Golf Museum fits in perfectly with this line. An event organizer looks ahead. The photo has achieved its goal and embodied the hundredth KLM Open in a beautiful way.

Now we look further into the future. In a museum, on the other hand, you reflect on what happened and what lies behind you. With this photo, the Netherlands Golf Museum keeps the memory of the hundredth edition of the KLM Open alive.”

The Dutch Open was first held in 1912 at De Haagsche Golf & Country Club.

The cup has since been awarded a hundred times to high-profile golfers such as Seve Ballesteros, Bernard Langer, Colin Montgomerie, José Maria Olazábal, Lee Westwood, Payne Stewart, Paul Casey, Martin Kaymer, Thomas Pieters and of course the Dutch Maarten Lafeber and Joost Luiten. Both Joost Luiten and Dirk Overveer won the tournament no less than twice, so that there are nine Dutch victories.

Seven Dutchmen once won the tournament. In addition to Luiten and Lafeber, these are: Gerard Martinus del Court van Krimpen, Jacob Oosterveer, Florent Gevers, Dirk Oosterveer and Joop Ruhl. The KLM (Dutch) Open is not only one of the oldest tournaments on the European Tour, it is also the oldest international sports tournament in the Netherlands.