Ramon van Wingerden, Manager Sports Development NGF, organized a golf exhibition in the Hague Historical Museum in 2014 in honor of the 100th anniversary of the NGF.

After the exhibition, which attracted no less than 10,000 visitors, Ramon donated part of the exhibited collection to the Netherlands Golf Museum.

In addition to historical books and historical golf material, the NGF also donated a medal, won by Dolf Enthoven, who played for the Dutch team in the 20s. 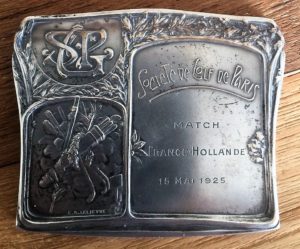 Also read the article in De Nederlandse Golfkrant on this subject: