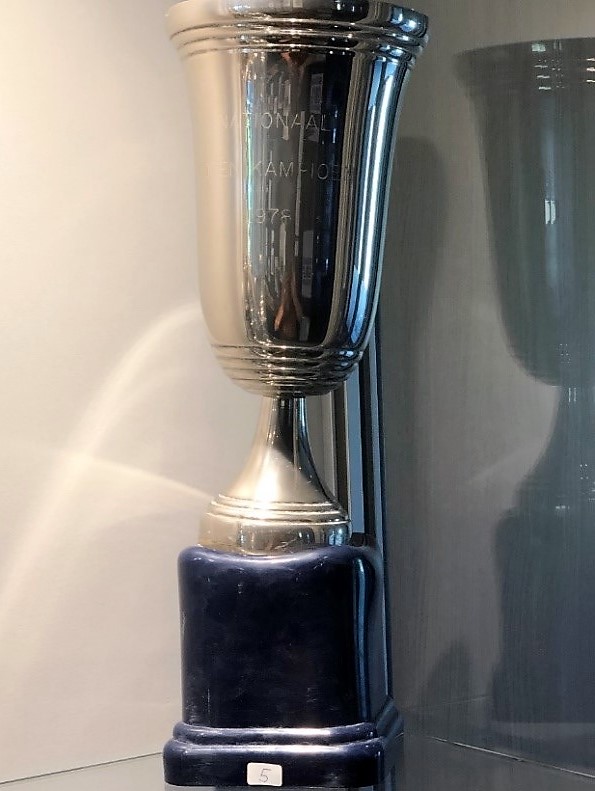 During a visit to the Dutch Golf Museum in 2017, Bertus van Mook, born on 7 December 1935, donated his last remaining cup of the National Open Championship for professionals to the museum. It is the cup of 1978, the only one, that he still had in his possession.

He became Dutch Champion no less than eight times, for the first time in 1969. In addition, he won many other cups and medals, but attached so little value to them that he gave most of them away to neighboring children, who could then play nicely in the sandbox.

Bertus van Mook looks energetic, he talks a lot and still regularly hits a ball at Golf & Country Club Geijsteren in Limburg, where he worked as a teaching pro until his retirement.

His success did not come to him. He had to work hard for it and sponsors were not there yet. He had to combine his golfing with a paid job. For example, he was a greenkeeper at Toxandria in Molenbeek near Breda. If he played a game there, he first had to mow the grass, then still walking on the track. Then quickly shower and play. He still remembers the 1,400 guilders and a piece of fabric for a suit. It was the prize for a champion.

Bertus came from a simple family, but was lucky that the family home bordered the golf course. Here he had all kinds of part-time jobs, but he was mainly a caddie. Many times he carried the bags of an entire flight with him. That’s why I stayed so small, he laughs at himself, this little man who made such great achievements.

If possible, he was on the track himself. A privilege for those who worked there. He turned out to have a feeling for the game, got better and better at it, started participating in competitions and ended up in the top segment. There he played against golfers for whom he was once a caddie. He rose to the top of the Netherlands, but always had to work there. If he was sent to an international championship, it was sent without any support. Impossible to beat the world’s top in this way.

He regularly played in the Dutch team at the Interland Holland – België, an international match for golf professionals. In 1993 he won the Senior Professional Championship (Senior Cup) at Golfclub de Dommel.

Bertus van Mook, together with his colleague Martien Groenendaal, was the creator of the Dutch Championship Matchplay for professionals for which the NK Matchplay Foundation was founded in 1988. Until 2004, this annual tournament was only open to professionals. The preliminary round was a strokeplay match on the Peelse Golf, the matchplay match was in the following weekend at Geijsteren, where Bertus was clubpro.

Since 2005 it has become an ‘Open’ and amateurs are allowed to participate. The organization of the National Open Matchplay as it is now called is still in the hands of the Nk Matchplay Foundation. From 2013, both the preliminary rounds (strokeplay) and the final matchplay tournament will be held at Geijsteren.