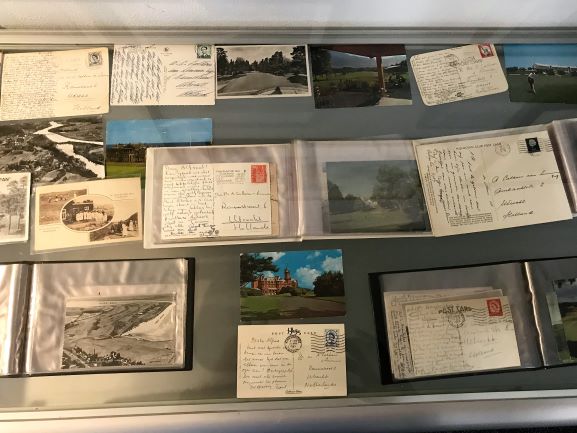 At the top of the display case is a large collection of postcards from all over the world, sent to Jonkheer Alfred Calkoen van Limmen, on loan from Aleid Kemper, golf journalist and rule expert.

Alfred Calkoen van Limmen had these postcards sent to him by youth members who played abroad. He urged them to send him a card about their golf performance.

Former youth players such as Ursul de Geer, Michiel Eijkman and James Muller responded to his wish. It yielded this exuberant collection of postcards.

Jonkheer Alfred Cornelis Charles Eliza Calkoen van Limmen, as he is fully called, was born in Zeist in 1900. He came from a well-to-do family and did not have to work for a living. This allowed him to fully focus on golf and became one of the best amateur golfers in the Netherlands. After his years as a top amateur, he became chairman of De Pan and later of the Dutch Golf Committee.

A special postcard is the Vrijland postcard from 1912.  Old Dutch golf postcards are very rare. On the front the plan of the Vrijland Private Golf Links. This was a private golf course on the Vrijland estate of the Van Pallandt family near Arnhem and a club that consisted of family members and friends, pioneers of golf in the Netherlands.

The golf course no longer exists and according to Robin Bargmann, the estate is now a recreational area for war veterans. According to Bargmann, the original orbit can still be seen, at least in part, with Google Earth. The postcard was accompanied by a map with the local rules of the Vrijland Golf Course.

A second special golf card is that of the clubhouse of the Noordwijkse Golf Club.