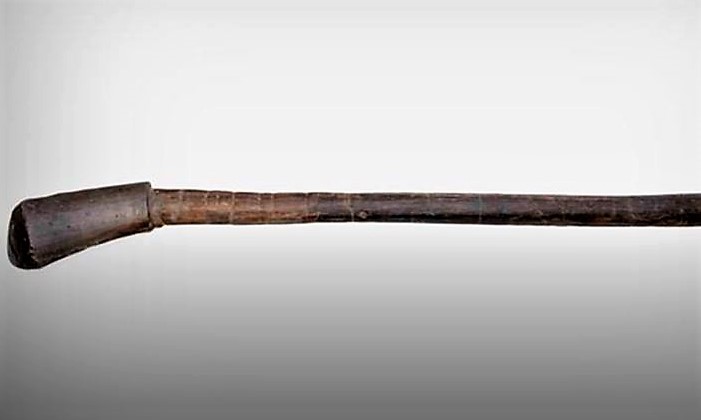 Cees Herweijer, depot manager of the Bureau Oudheidkundig Onderzoek Rotterdam (BOOR), is speaking. He made a study of a special archaeological find: a colfstok from the 16th century, excavated in Schiedam.

Found in the embankment of the canal
Prior to a construction project on historical land, archaeologists first come into action. Before excavators destroy everything that is of value in the soil, they meticulously search the terrain for archaeological objects.

Several times the Bureau Oudheidkundig Onderzoek Rotterdam has done excavations at Castle Huis te Riviere in Schiedam, located on the edge of the old city of Schiedam. Part of the castle is still intact. What surrounded it was lost, among other things during the Hoekse- en Kabeljauwse Twisten around 1350 and two centuries later during the Eighty Years’ War.

Schiedam was founded around the middle of the 13th century and received city rights around 1275. Aleida of Hainaut, the daughter of Count Floris IV of Holland, granted these rights and had the large castle Huis te Riviere built on the outskirts of the city.

The castle grounds have been investigated several times by archaeologists. During the last excavations, in 1995, a colfstok from the 16th century was found in the embankment of the moat. Excavated by amateur archaeologist Machteld Countess of Limburg Stirum.

‘We don’t know how it ended up in the canal’, says Cees Herweijer, depot manager of the Bureau Oudheidkundig Onderzoek Rotterdam (BOOR). ‘You can only guess at that. But the current wave used to be called colf and was also played on ice in winter. so it could well be that the stick ended up in the water like that.’

Colf was exiled from the city
The colfstok consists of a wooden handle with a lead slipper at the bottom. The handle, which was wrapped with leather or rope, has been broken off. Originally it must have been 1 meter 10 long. Without the handle, it measures 60 cm.

‘Usually you only find the lead slipper’, says Herweijer. ‘They are detected relatively often with a detector. They remain intact under the ground, but the stick is usually lost. Not this time and that’s why this find was so special.’

The current finds from excavations in Schiedam go directly to the provincial depot. The finds that BOOR made in Schiedam in the past have also been transferred to the depot of the province of Zuid-Holland. Not for the purpose of storing them in a basement. ‘It is the province’s policy to keep as many finds as possible out of the depot and to end them up in showcases.’

And that’s how this antique colfstok ended up at the Dutch Golf Museum. Received on loan from the Province of South Holland so that everyone can enjoy it.

Herweijer is well documented and can tell a lot about the background of the stick. “It was used for colf, the first version of the current golf game,” he says. ‘Initially they had wooden sticks and wooden heads, later lead heads were used.

The balls were first made of elm or beech wood and from 1500 also of leather filled with cow hair. The intention was to play the ball to a goal in as few strokes as possible. Often these were doors and trees and that caused a lot of damage; people were hit. Therefore, the game was banished to places outside the city. Later came the pumping game that was very popular. That was played on a special course of about 20 meters long, with two poles at the end as the goal. These were often located near an inn. In 1769, Amsterdam had two thousand of these pumping lanes.”