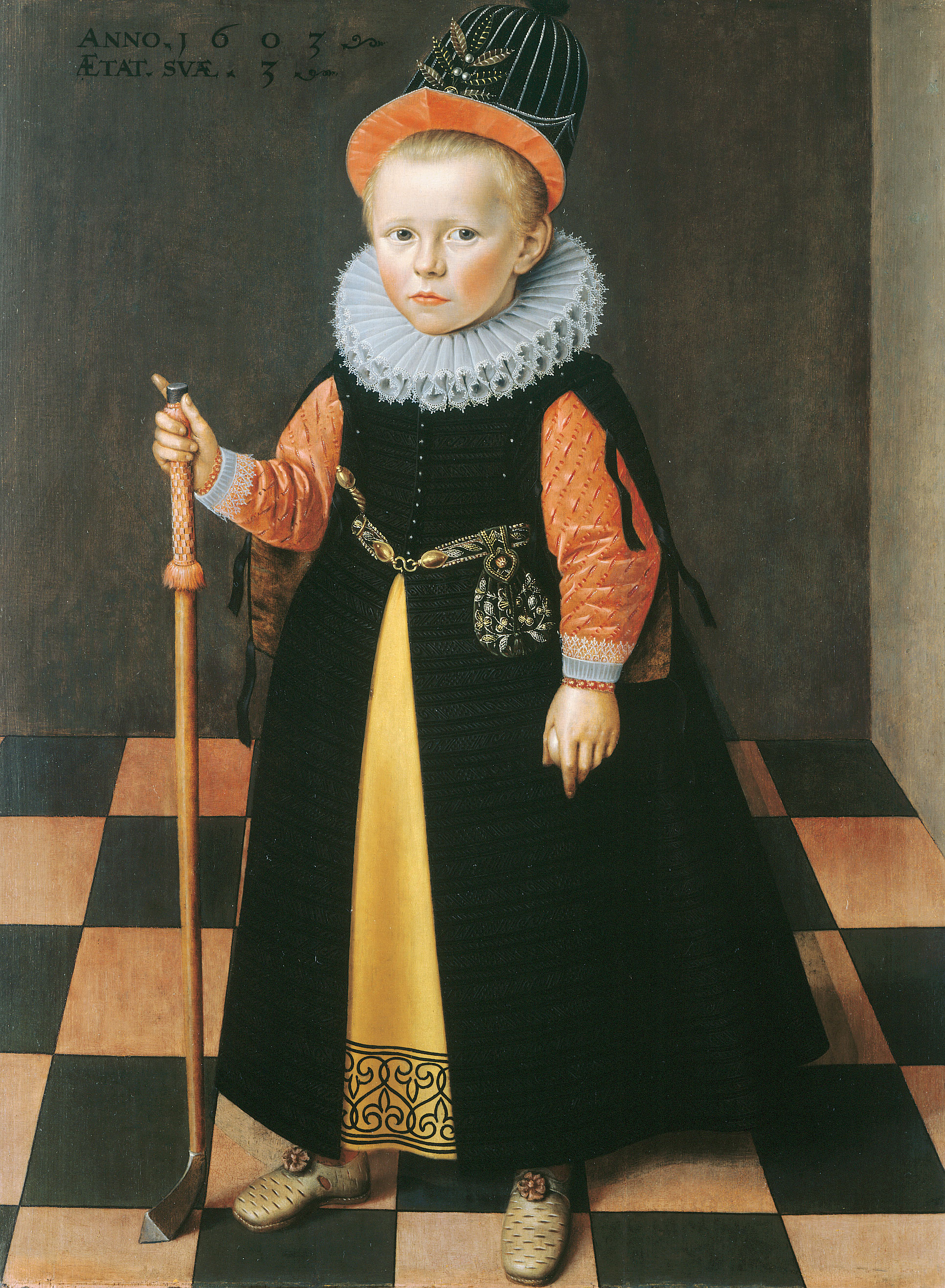 This painting is a product from the Frisian School, attributed to Adriaen van der Linde (perhaps Wybrand de Geest).

This charming portrait of a three (!) year old boy is one of the first examples of a portrait painting of a boy with a colf club and a feathery ball filled with feathers, used in the Dutch game of colven. The popularity of this game is evident from the number of paintings and drawings from the sixteenth and seventeenth centuries in which the game is depicted. Note the special shape of the slipper at the end of the colf stick.

The image of a child holding a colf club and wearing formal attire became a particularly popular format in children’s portraits in the seventeenth century.

Although the game was played by adults, in children’s portraits it was seen as an accessory related to male pursuits and therefore mainly as an indication of the male sex of the young child. The earliest example of a boy with a golf club is known from a drawing after a lost original painting from 1587, showing the four-year-old Hugo Grotius, followed by a presumed portrait of Maurits the Heraldry, two years old, painted in 1595.

Although there are no clues as to the identity of this young boy, every detail in this painting confirms the wealth of his parents and his status as a child of an aristocratic family. In particular, his costume is of the greatest luxury, inspired by Spanish fashion of the late 16th century, and worn in Flanders from 1600. The execution of the portrait is particularly fine because of the sensitive representation of the boy’s face. The artist’s technique shows a great love of detail, particularly when replicating textile patterns and ornaments in the costume.

The starched linen collar cuffs, example of a millstone collar, are trimmed with a decorative lace detail, while the belt and the attached bag are embroidered with a carefully designed ornate gold design.

The handle of his colfstok, which is only partially visible, is an artistic tool to emphasize the masculinity of the child, which is regularly used in portrait iconography. His dress consists of a black brocade coat, buttoned up to the waist, with hanging sleeves and visible strings. The jacket is worn over an embroidered yellow silk underskirt.  His coral-colored sleeves have decorative, diagonal slashes that match the coral bracelets on his wrists, as well as the coral silk lining on his black hat, which is also decorated with a sprig of bay leaves and berries. Coral strands were worn not only for decoration, but also for their supposedly beneficial ability to protect children from ‘convulsions and fear’. The addition of bay berries may refer to the intention of the parents to raise their son to the highest degree; Greek scholars wore a wreath of bay leaves to show academic achievement, hence the word “baccalaureate,” meaning laurel berries, and laureates of poets were also crowned with bay leaves.

There are no indications of the identity of the artist, but the costume suggests that the portrait was painted somewhere in the north of Holland or Friesland. Stylistically, the painting is close to the work of a Frisian artist, Adriaen van der Linde (1580 – 1630). Little is known about this artist, except that he was already registered in Leeuwaarden in 1595. The painting is probably by an artist who works closely with and is influenced by Adriaen van der Linde. One possibility is the artist Hans de Clercq, a pupil of Van der Linde in Leeuwaarden and married to his stepdaughter.