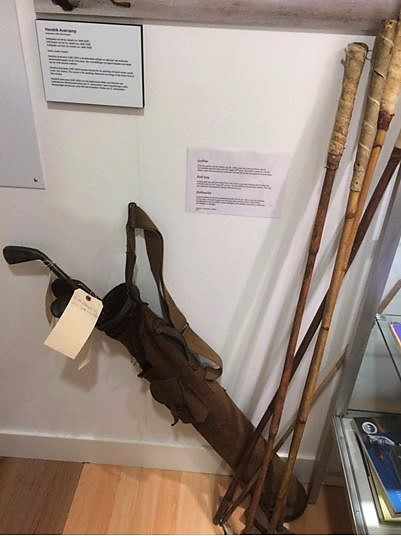 We are particularly proud of the fact that, as far as is known, we have the oldest golf bag in the Netherlands in our museum, which also contains some authentic clubs. How did we get this?

Initiator of the museum and chairman of the foundation, John Ott, scours city and country in search of golf paraphernalia. For example, he came across this bag with sticks at a flea market. For a habbekrats on the head tapped.

Who can describe his surprise and joy when Mr Ramon van Wingerden of the NGF Early Golf went crazy when he saw the initials SBWvLS on the bag and immediately went looking for confirmation of his suspicion that this was something very special.

And yes. The bag appears to have belonged to Mr. S. Sjuck (pronounced Sjoek) B.W., Count of Limburg Stirum, who became Champion of the Netherlands with it in 1915. The bag is from around 1900. Sjuck Bernhard Walraad (1867-1954) was also a renowned polo player. Some polo sticks were also included with the bag, as well as a cleaning stick to clean the barrel of a gun.

In the same display case we see the certificate on the occasion of the 25th anniversary (1853-1878) of L.G.A., Count of Limburg Stirum (Louis Gaspard Adrien, 1802-1884), Commissioner of the King in the province of Gelderland (before Groningen) and grandfather of Sjuck.

Incidentally, Sjuck’s grandfather was called Sjuck van Welderen on his mother’s side and that’s nice, isn’t it?