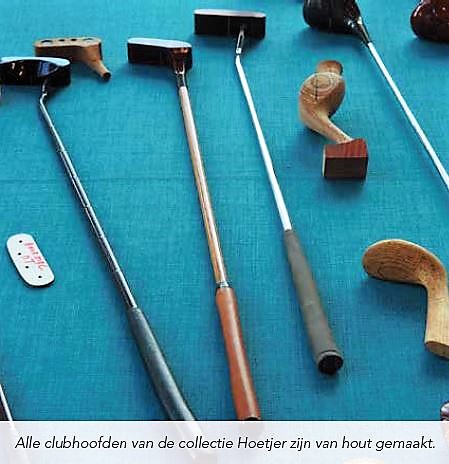 It is the stories behind the objects that bring the Dutch Golf Museum to life. From people who can tell about the past and present.

Collector Ton Born donated a collection of new golf clubs to the museum. Made in the eighties by Gerard Hoetjer. Not antique, but very special. Hoetjer was the only golf stick producer ever in the Netherlands.

The age begins to count. The house in Nieuwegein is getting too big. Ton Born wants to sell it and live smaller with wife Coby. But first he has to get rid of his huge collection of old golf materials. He collected part of it for himself, part for sale. Through his company Golfing Memorabilia he trades in it. Now he wants to get rid of everything and he donates a unique set of golf clubs, made by Gerard Hoetjer, to the Dutch Golf Museum.

“When I sell them, I don’t know what happens to them. Now it has a destination for the future,” says Born.

Club heads of wood
Dressed in a traditional golf outfit, Ton Born hands over on Saturday, April 13, 2017? a set of Dutch-made golf clubs, made by Gerard Hoetjer, to John Ott, curator of the Dutch Golf Museum, who also wears a traditional golf kit.

It is the day on which the opening game of the Dutch Hickory Tour takes place at Golfbaan Landgoed Bleijenbeek and both play. The clubs look fantastic. Unused and shiny. What is special is that all club heads are made of wood, up to those of the goldfinches. “Gerard Hoetjer is the only golf stick products that the Netherlands has ever known.

He was assisted in this by his brother Harry”, born explains. “The idea for his company, called Hoetjer Golf-Industries, came about when he started dating the daughter of a golf pro who told him that the pros often also repaired the clubs, but were not always well equipped for it. For him the reason to focus on that.

In the beginning he borrowed the necessary swingweight scale from a pro in Arnhem. In 1982 he made a replica of it and it was no longer necessary. Later he set up a workshop at a wood factory and started making clubs and goldfinches himself. Entirely according to your own design.”

Patented method
Hoetjer’s club heads are made according to a unique patented method. From layers of beech, impregnated with epoxy and compressed under a high pressure and temperature.

When the first prototypes were ready, a test took place in the United States, which showed that top golfers hit ten percent further with it. Not only that, but also the sound that the beating with this wooden produced was special. ‘Only wood reflects the sound from which you can tell how you hit the ball and where it is going’, the accompanying brochure reads.

Hoetjer’s wooden, which came on the market under the name Wood Eeyre, are similar to a driver and came from 3.5 to 7. If necessary, they were individually tailored. Gerard regularly performed at trade fairs, not only in his own country but also abroad. The Australian professional Greg Norman would even have played with it.

Unfortunately, an accident in the factory, in which Gerard Hoetjer broke his back and ended up in a wheelchair, put an end to the Hoetjer empire.

The fact that part of the collection now has a place in the Dutch Golf Museum is experienced by the two Hoetjer brothers as very honorable and they are certainly planning to take a look there soon.

Search for Hoetjer
But how did Hoetjer’s clubs actually end up at Ton Born? “In the 90s I bought them from golf pro Jacob Tier,” he says. “I found them very special and was triggered by the underlying story. Especially because I knew that Gerard was the only Dutchman who ever made golf clubs. Recently I started googling the name Hoetjer and I came across a garage in Stadskanaal with the same name.

When I called the company, I got the owner on the phone and he told me that Gerard is his uncle. You can’t get it any better than that. I contacted him and his brother Harry via e-mail, after which I also spoke to them both on the phone.

I told Gerard that I wanted to donate my collection to the museum and he liked it so much that he sent me more clubs and a few molds. Truly fantastic.

These are also intended for the museum and will be given an honourable place. I find it extremely valuable that he has now transferred his life’s work to the museum. In 50 years’ time, it can still be seen that there was once a Dutchman who made golf clubs. And what a one.