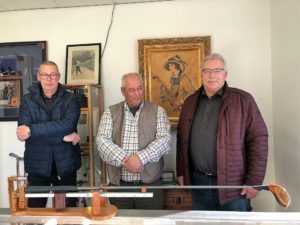 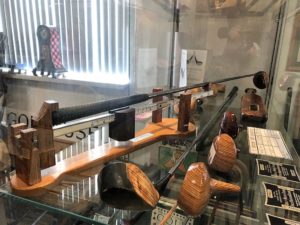 Harry and Gerard Hoetjes came to the Dutch Golf Museum on 28 February 2022 with a special device in their hands.

Harry Hoetjer gave the swing weight scale he made on loan to the golf museum. An essential device, because when making good golf clubs, it is certainly also about balance and how the weight is distributed over a golf club.

In 1980 Gerard Hoetjer started repairing golf sticks. At the time, he was dating a daughter of the golf pro of the Noordlarense Golfclub and she told him that repairing golf clubs was often done by the golf pro himself. Apart from the fact that this was a time-consuming job, not everyone was equally skilled at it. In 1982 Harry Hoetjer, brother of Gerard, built a complete replica of an existing expensive swing weight scale, which until that time had to be borrowed. This is how Hoetjer Golf Services was born, later Hoetjer Golf Industries, the only golf club manufacturer of golf clubs in the Netherlands.

This swing weight scale is an addition to the already present molds and sticks in the Hoetjer display case. This gives visitors an even better insight into what it takes to make a good golf club. 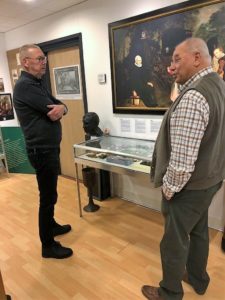