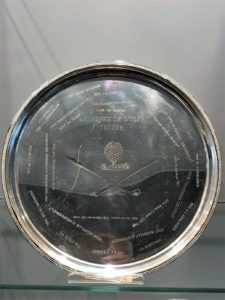 This silver bowl was an exchange trophy of the national mixed competition for senior members of A and B clubs with a high handicap and was awarded to the winners of the national final from 1991 to 2018.

As a thank you for the much work that the Arendsen de Wolff couple has done for the NGF for more than 20 years, this scale was named after them when this mixed competition was established.