Reopening of the Dutch Golf Museum 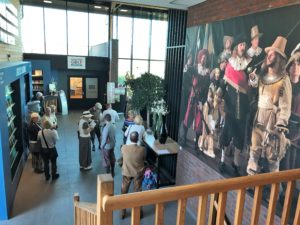 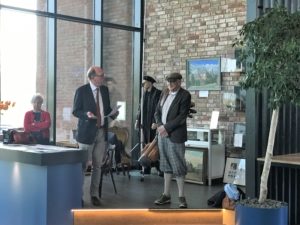 Ernst briefly discussed a piece of history, expressed his appreciation for the museum and indicated that the Dutch Golf Federation would like to strengthen its ties with the Dutch Golf Museum and that discussions about this are ongoing. Then, under the supervision of the large group of interested parties and the press present, he opened the entrance door to the 1st Room of the museum and all guests could start their tour of the museum.

Here are many objects with great cultural-historical value. I don’t mention them now, they are described in detail on our website www.golfmuseum.nl. But I do mention one object. On the one hand because of its uniqueness, it is a find from the cargo ship that sank in the Zuiderzee in the 16th century, the OM 11, which is known as the Biddinghuizer colfschip. On the other hand, because we only received it on loan from Erfgoedpark Batavia in Lelystad since two days before the reopening of the museum. The object, or rather the objects, consist of a colfslof with stem, a broken part of the stem and the two halves of a sawn-through lead slipper. They have been given their own display case between the ‘Pieter van Afferden’ display case and the ‘Van Limburg Stirum’ display case.

From the 1st Room you will be guided via the timeline, which runs like a red thread through the entire museum, to the 2nd Room. The timeline begins in the corridor in 1261 and ends in 2022, at least for now, at the beginning of the 3rd Chamber. Also from this timeline, the ink is only just dry.

A display case for “Playing stick-and-ball” has also been added and a reclassification of the existing golf objects has taken place. Of course, all the silver has also been polished and everything and span cleaned. Finally, QR codes have been placed on the display cases for explanation on your own smartphone, to be able to tell the stories behind the golf objects even better.

We, that is, the board and the volunteers of the Dutch Golf Museum, had been looking forward to this day with some excitement, but expectantly. And we were not disappointed. The admiring reactions, occasionally expressed in utter amazement, did us more than good!

With this professionalization, we are ready for the coming period. But we are not going to sit still, because there is still plenty to do. Of course we invite you to visit the renewed golf museum (again). We’d love to hear what you think of our efforts. 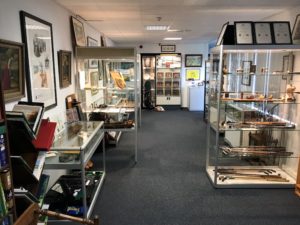 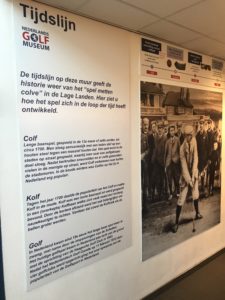 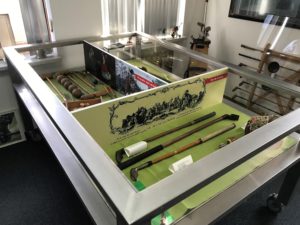