Romana Oosterbeek-Airoldi is married to Herman Oosterbeek, whose dream was to one day establish her own golf museum. 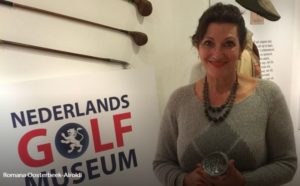 ” My husband was a great antique lover and collector. Due to the growing golf enthusiasm and the close involvement in golf, he came up with the idea to set up a golf museum. Herman collected golf objects everywhere he went and soon had a nice collection together.

Unfortunately, he became very ill and he died before he could make his dream come true. I am therefore very happy that there is now a real golf museum and I did not hesitate for a second when the curator John Ott approached me to also house Herman’s collection in the museum.

His collection can now be admired at the place Herman had in mind, the Dutch Golf Museum. That’s how I feel that Herman’s dream has come true.”

Also read the article in Golf.nl on the subject in question: