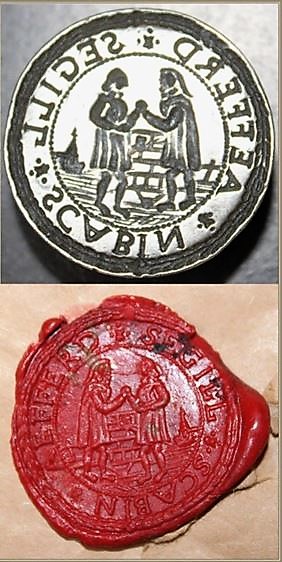 Finally, in this display case is the Schepenbank seal of Afferden that was used from 1663 to 1786.

Afferden (Limburgish: Offere) is a place in the municipality of Bergen, in the north of Dutch Limburg located on the Maas, between Heijen and Nieuw-Bergen. The village had about 2250 inhabitants in 2006. The area is rich in forest and heathland. Here is the ruin of the former Bleijenbeek Castle. The estate of the same name is also a reminder of this.

Afferden is first mentioned in 1176, in a provision of the Archbishop of Cologne in which Afferden is made indebted to Xanten. Afferden was in the Middle Ages two-yearly under the lords of Afferden and Bleijenbeek. Since the War of the Spanish Succession, the village was in Prussian hands. In 1794 it was occupied by the French, who founded the municipality of Bergen in 1800, in which Afferden was incorporated. This municipality continued to exist after 1815.

The oldest mention of the aldermen of Afferden is already on March 21, 1363. It was not until 1534 that the alderman’s bank had its own seal, with Saints Cosmas and Damianus. Cosmas holds a balm jar in his left hand and Damian a book in his right hand. In later versions they stand in front of a brick wall and there is no book, but Damianus gives a balsam jar to Cosmas.