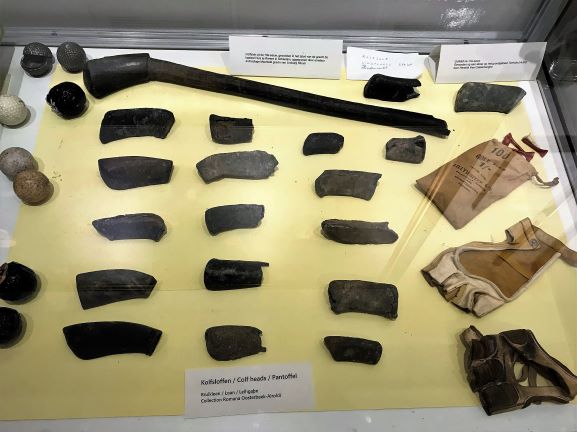 We are particularly proud of our collection of colfslofs from the 16th and 17th centuries. The colfslofs of the past are the club heads of today. A colfslof was donated by Diana Mertens when she received her loaned slippers back. A large number of the colfslofs lying here have been given on loan by Romana Airoldi. Colfslofs were made of lead, sometimes it was a copper alloy and often they had a decoration or silver gloss.

One of our showpieces (on loan from the province of South Holland) is a lead colfslof, which still contains a large part of the wooden stick. This colfstok is from the 16th century, found in the embankment of the moat at castle Huis te Riviere in Schiedam, excavated by amateur archaeologist Machteld, countess of Limburg Stirum.

Another showpiece is a lead colfslof, probably 17th century, found on a field on the territory of Terhole (Hulst) by Hendrik Van Vaelenberghe, donated to the museum in 2017.

We also see children’s colfslofs. On several images around you you can see that it was bottled at a young age. Incidentally, as mentioned before, the children who come across as girls are all boys.