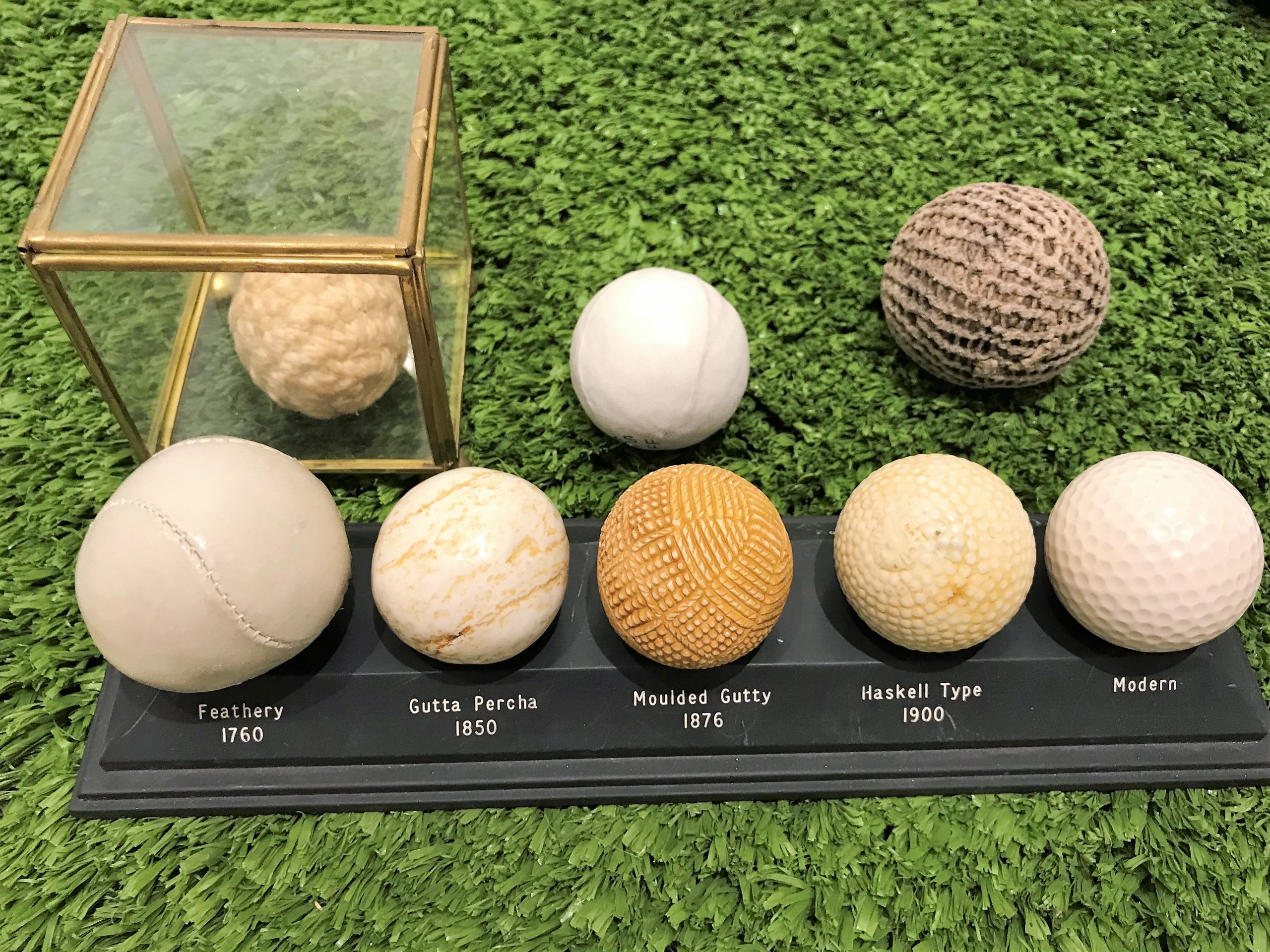 DEVELOPMENT OF THE GOLF BALL

The ball is round

We probably all know stories about shepherds who hit stones with their inverted staff. But we leave the Stone Age for what it was and focus on real balls, such as those used in stick-and-ball games.

As far as is known, the very first balls used in the colf game were made of wood. At least in the Netherlands. And as long as the contrary has not been proven, we also follow this general assumption. Whether that was also the case in Scotland outside the Netherlands, no convincing evidence has been found for this. The wooden balls were often made of the very hard boxwood or beech wood. Trees carved from the good wood, which were common in the Netherlands. They were slippery and flew no further than about 75 meters.

Traditionally, a stoet was a ball wrapped of linen (textile) with which it was rolled (compare football). This stoet, hard but resilient, was also used for the “sollen metten colve” (compare hockey). How the stoet fits into the colf game as we mean it is not very clear. Colf written with a c, to distinguish it from contemporary golf, which is basically the same game.

But already in the 15th century golf balls were developed from leather. First filled with cow hair or straw, the hairy. The ballers from Goirle became famous with it and exported masses of these balls to Scotland until the early 17th century.

Later, the leather balls were filled with boiled compressed goose feathers or chicken feathers and painted. The penneball in the Netherlands became the famous featherie ball. Three pieces of cowhide were sewn together and then filled with the wet, long-boiled feathers. In one ball went a top hat full of feathers. When the ball was filled, the last stitching was closed with a fourth piece of leather and wet in a round shape hammered or pressed and then dried. By drying, the feathers expand while the leather shrank. This resulted in a rock-hard ball.
These featherie balls were very expensive, because the process was time-consuming. A ball maker could make at most three to four balls a day. In addition, these balls did not last long and were virtually impossible to repair. Yet this ball was the standard for more than three centuries. You could hit 180 meters with it.

Because these balls were so expensive, more expensive than a golf stick, even more expensive than a caddy, people did not want to lose them. Better than losing a ball, you could hire two caddies, one to carry the bag and one, which you sent forward to see where your ball ended up, the so-called fore caddy.
Before they started hitting, they first warned by shouting loudly at him: “Fore! Caddy.” That meant for him that you were going to hit and that he had to pay attention to where the ball came down.

In the search for cheaper balls, Robert Adam Patterson invented the “gutty” in 1848, a ball of gutta percha, the sap of the rubber tree of the same name from Malaysia in particular. At first it seemed to be a big failure, the balls fell apart after a few strokes, but eventually his brother developed a useful guttie ball. This guttie was still slippery at first.

But it was soon discovered that the dents caused by the hitting positively influenced the ball flight. They began to apply these deliberately to new balls with a knife, hammer or chisel. These balls were called “Brambles”: blackberries because of their similarity to this fruit. But as mentioned, these balls sometimes fell apart when hitting. That is why a rule had been made that you could place a new ball where most of the smashed ball was.

Around 1900 there was a new development by the American Coburn Haskell, who designed a ball from two parts: the first two-piece ball, which would substantially change the game of golf. The Haskell ball consisted of a rubber core wrapped with rubber wire.

In the 60s of the 20th century new materials and better synthetic resins were found and today’s balls have two, three or even four layers and for every type of player there is a suitable ball.